Interview With Huw Williams Before His 2017 Marathon Des Sables Run 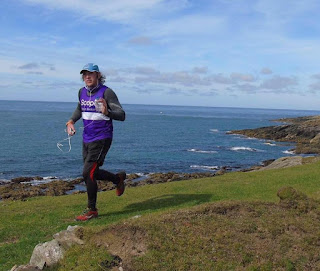 In a few days Huw Williams will be running the Marathon Des Sables (MDS) in Morocco; April 9th– 14th, 2017.  It is a six day 251KM (156 Mile) ultramarathon run through the Sahara Desert.  Over the last few months I have had conversations, via Facebook, with Huw as he is running to raise funds for Scope via Just Giving.  I figured it would be good to ask him some questions and also let others know of what he is doing so they can contribute as well.

Tell us a little about yourself:
I am from Pwllheli on the Llyn Peninsular in North Wales UK.  I am married to my very understanding wife Carys and have 2 great kids Gwion and Cadi and a nut job of a Dog called izzy. We live on a farm and I work as a business development manager as well as being the race director for the Pen Llyn Ultra; a 75 mile Ultramarathon in Pwllheli July 29th, 2017.

How long have you been running, how did you get started, what led you to choose running over other sports or endeavors?
I’ve been running distance now since my first Marathon in 2014. I am a keen sailor so the shift to run a majority of my spare weekends happened I would say 9 months ago when I signed up for the Marathon Des Sables last year.  This led to committing myself to running races on the weekends rather than sailing.  What I enjoy about running is you are telling yourself what to do, you are 100% accountable.  I love the freedom and also the friendship with the running community no matter what peoples capabilities are

How long have you been running ultras?
Although I have been running over the marathon distance for a couple of years my first official one was the Eryri Ultra in 2016 (58Miles through the Snowdonia region of north wales) 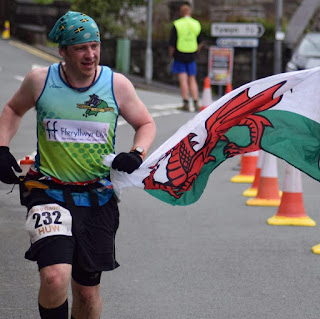 What is the longest you have run so far?
The longest I have ran in miles at one go is 58miles which took 18hours

I first met you on FB in the Maffetone Group – what led you there?
Yes, and great group!  Being a running geek I had heard last year a few guys talking about the MAF Method and being fat adapted.  In January I was running back to back marathon distances at the weekend and I was fatiguing early on and getting a swollen belly.  I made the decision that I needed to commit to my nutrition as much, if not more, than my fitness.  So I searched on Facebook and found it then started the 2 Week diet.

How has the MAF training been going?
It’s been very liberating!  The 2 Week diet worked so well and I was on a tiny amount of carbs afterwards.  The nutrition side of it really suits me as pasta, bread and potatoes make me swell and I didn’t really eat a lot of them before.  Training at a lower heart rate was all about control in the start, however as I am into Ultra Running and Marathons the pace suits me and the recovery is instant.  Running fasted works and listening to my body and understanding that I’m thinking I am hungry rather than being hungry

Are you doing  anything specific with regards to diet?
Yes breakfasts are either a bullet coffee (Black, coconut oil and butter) or Bacon, avocado and egg.  Lunches are nuts, chicken and salad and evening meals are mainly veg and meat, oh and cheese!

What led you to decide to run Marathon Des Sables (MDS) as a way to raise money for SCOPE?
Now then!

The Welsh Football coach said “Don’t be afraid to dream” so I contacted Scope to run this year and they said unfortunately all the places had gone but to put my name down for 2018, I said that I would be more than happy as a replacement should anyone become injured or pull out and a few weeks later they called to say a place had become available.  If I wouldn’t have asked about being a replacement in the first instance then I might have still been offered a place but who knows - it goes to show you have to keep chipping away at things even if its just and email, extra mile or half an hour less in bed!

Before my dad retired he was head of the North Wales social services and I have always felt humbled having an able mind and body so Scope was the first choice charity to raise funds for.  We are so lucky to have working vessels that we move and live in and so many people disable themselves through television and lifestyle choices

What sort of training have you been doing to get ready of MDS?
I’ve been averaging 100k a week made up mostly off road with 2 back to backs at the weekend and a few midnight runs for the long day practice.  I have also done weights for core strength as well as yoga and now walking with a sauna suit, hot baths and layers of clothing to get ready for the heat!

Are you ready for the race that is coming up in a few days, any fears?
Yes very ready. The taper time makes you excited and exhausted at the same time! A bit like Christmas!

Fears? Yes loads but I’m pivoting my thoughts away from them as they have no benefit to me when I’m out there.  As the jungle tribes men of Borneo said “Fear is a disease” and I have no intention of catching it!

How are you fueling for MDS?
I’m going away from MAF a bit for this as with freeze dried food I am taking they have Carbs and the REGO recovery has sugars.  I’m also taking back up gels but have nuts, cheese, pepperoni and biltong to snack on.

That should give you a little more information about Huw and I encourage you to follow his trek through the Sahara Desert.  You can follow it at the Official MDS site or you can also follow entires from the UK & Ireland at their own site.

Also, I would ask that you consider contributing the cause he is running for and you can do that on Huw's Scope Just Giving page.

Update April 5th, 2017 :  To follow Huw during the race you can go to the Live MDS Site

To give you an idea about the race here are a couple videos:


The Discovery Channels Toughest Race on Earth with James Cracknell