It is interesting in my 44+ years of running one thing has been fairly constant  - it has been hard to
find shoes, shoes that fit and are comfortable that is.   From my first pair of real running shoes, the Adidas SL-72 to my favorite racing flats, the Tiger Jayhawks, I have always struggled to find shoes and if per-chance I did they would in no time be replaced by a model that was lighter, faster & all around “better” but more than likely did not fit.

If you have been at this as long as I you will have seen about
everything you can think of in shoes from air, to gel to built in wedges – you name it.  What is constant, at least from my perspective, is that in all these attempts to make a better shoe all I find is that my feet either do not fit in them as they should or the added feature works to correct one thing and creates issues elsewhere.

My biggest issue over the years has been with regards to volume.  By volume I am not talking about how loud they are, and I have had some colorful shoes, but the physical volume in the shoe itself.  You know you have a volume issue when you lace your shoes up and the laces pull the shoes so close you cannot tighten then much more, if at all.   Initially I just figured I had narrow feet but my problems were not solved by those companies that either made narrower shoes or made narrow sizes as they seemed to squeeze my toes or pinch my feet where the upper met the sole.   It was not until  about 15 or so years ago while I was looking for hiking boots to hike the John Muir trial that I learned about volume, and oh yea it is just as also hard to find hiking boots, and that my issue was not width but volume.

Knowing the issue with my feet has not solved my issues in finding running shoes, well shoes in general.  I also realize, having sold shoes and seeing how most shoes seem to fit the large majority of people, that my low volume feet are not the norm but in the minority.   I fully understand why most companies when designing or upgrading shoes tend to make them more voluminous as they are seeking to fit the most people.  However this does not make finding and keeping shoes any easier since even if I modify my shoes by adding padding to the underside of the tongue or just living with them it seems the next model that comes out usually fit worse – such was the case with the Altra Torin 2.0 and Lone Peak 2.5s as the new models would do fit as the older ones did.   Also, once in a while I find a shoe that seems to fit only to find that after a few runs they stretch just enough so as to no longer fit as with trying the new Topo Terraventure.  Again, I do not blame the shoe companies, as I understand they are in business to make money and by the good reviews the new versions of the above shoes are getting they must be meeting a need, just not mine. 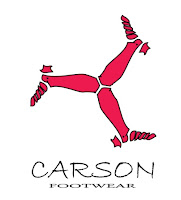 So enters Carson Footwear a minimal shoe company that is American made in Milwaukie Oregon. Everett Carson, contacted me.  In talking about volume and how the shoes laced up Everett even offered, if need be, to move the lace eyelets out some if required.  So not only did the owner contact me, never had that happen in 44+ years of running and even working in the running shoe business in a store or two, but he also offered a solution.  Based on that email correspondence I ordered a pair and upon receiving them I was pleasantly surprised by how they fit.   As for the minimal aspects of them I realized I would not be running far in these right away as I would need to learn to run in a more minimal shoe. Since on the first 3-4 miler my feet and legs knew that things were different.
They are not a minimal shoe in the vein of Vibram 5 Fingers or other such shoes as inherent in their design is more cushioning while remaining minimal in nature and feel.  In wanting to learn more about the shoes I contacted the company and to my surprise not only did I get a response quickly from Rachel, one of their employees, but also the owner,

During the process of trying them, running up to 8 miles, I submitted an application to be a Carson Footwear Ambassador for 2017.  My main reasons for wanting to represent Carson Footwear were their being an American made shoe, having great customer care  & being what I see as a great shoe once my body gets used to using them.  Well I got a reply that I would be accepted as an ambassador if I wanted to be one for 2017.  As I knew I would still need to race my ultras and longer races in other shoes till my feet and body were ready for to do so in the Carson’s I asked if that would be OK and they quickly responded that it was OK.  They said they wanted to make sure I got used to their shoes in a manner that did not injure me but would instead work to strengthen my feet and legs.  Thus, with that response, I accepted and am now a 2017 Carson Footwear Ambassador.

So what about minimal shoes?  Is it a fad that flamed out after Born to Run when many overzealous to go minimal transitioned too quickly and got injured or is it an integral part of having healthy feet.  I will opt for the latter.  Even before I looked at Carson Footwear I had been moving towards strengthening my feet via running in Xero Sandals every now and then as well as using more minimal shoes and sandals for every day use so as to further strengthen my feet.  I have been running in Altra’s for about 1.5 years so have gotten use to zero drop in my shoes as well.   Over many years of running I have had a number of problems with my feet all of which I was told could be corrected by this shoe, some form of orthotic or insole.  What I ended up finding was that each attempt to correct my feet while maybe temporarily minimizing my foot issues instead transitioned issues up my leg to my knees or hips and creating other problems.  No one offered up that maybe I just needed to do less for my feet and instead work to strengthen then.  As I look back I think I can trace many of my foot issues to the ever-increasing attempt by shoe companies to control feet by various features in them.  While I was much faster and lighter when younger if you have ever seen a pair of Tiger Jayhawks you would see a shoe with little cushion and even less support but I never had issues running even marathons in them.

So that it is, a fairly short over view of my relationship with my shoes.  I am sure if you have been running for any time you may have had similar trials or maybe you are blessed with “normal” feet that just seem to fit about any shoe.  Even if you are blessed with “normal” feet I still think you might want to investigate a minimal shoe such as Carson’s so as to work to strengthen your feet.  You may never make the full transition but your feet will thank you for working to get them in shape just as you get the rest of your body in shape.

Take care of your feet they are key to all that happens above them.

If you would like to try a pair of Carson Footwear shoes you can use this code to get 10% off the shoes or anything else you want to buy:  Run2017tonyk

Email ThisBlogThis!Share to TwitterShare to FacebookShare to Pinterest
Labels: Shoes