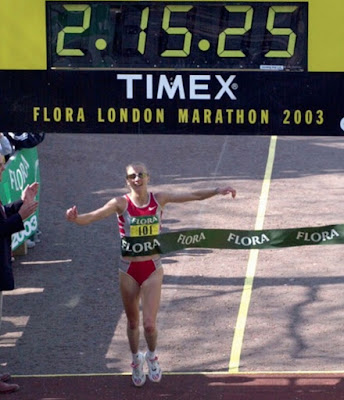 “The biggest danger is trying to put too much pressure on yourself, trying to get in too good shape.”
Paula Radcliffe

I expected more entries, only got two, in the book giveaway and the winner is: Steven Pohnert and I will be in contact about the book you would like.  Now for an added bonus since there were only two entries I am going to give two books away and Mary Stewart is the other winner - surprise!

Looks like Shalane is headed back to New York.

Good videos on movement assessment and exercises.  Also check out the ACU Running Program at Topo

Some thoughts on the professionalization of ultrarunning.  Bottom line, and what is often missed in the conversation, is that sponsorships and race winnings are there if a sort generates revenue from consumers.

A look at defining the upper limits of performance

A talk with John Rutherford and Peter Defty, of Vespa, on his change to Optimized Fat Metabolism (OFM)

Taking injuries seriously and not ignoring them: Are You In Denial

Probably not new to anyone but good to remember: Injury Proof Your Running in 6 Steps

At last check Karl Sabbe is still on track to break the current FKT on the AT.  This site is tracking is progress as compared to the current record and at 29 days he was 111 miles ahead.  Should be noted that Joe "Stringbean" McConaughy did it unsupported and Karl is doing it supported

David Roche looks at the art of pacing yourself

How about doing some trail running in Finland

Camille Herron and her Husband, Conor Holt ,have started a coaching service @ Run With Camille Coaching

Wow, winning the European Championship 1500m at 17 years old and going form the front with 800m to go.  Also, cool to see all three brothers at the front at one point.  Then he goes on the next day to win the 5000m in much the same manner over the last 800m.


A Paula Radcliffe Documentary from BBC in 2015