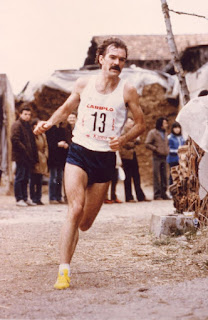 “Running well is a matter of having the patience to persevere when we are tired and not expecting instant results.”
Robert de Castella


The winner of the SFuels drink was Jenny Ham

For this week's Interview Tuesday I talked to Ultra runner and Race Director Doi Calbes of the Philippines.  Enjoy the interview and check out one of his races - there is a mention of his Mt. Apo race further down in this post

Good article that deals with the saying"good is the enemy of great" and positing that "It's Okay to Be Good and Not Great."

I posted this last week but as the race starts this weekend, when it ends????, so how long/far will they go next week at Big's Backyard Ultra.  Will be interesting to see how far Courtney Dauwalter can go and how Guillaume will do this year.  Should be fun - to follow that is:)

A look at the belief by some that one needs to refrain from caffeine before an event when it is to be used to get the most effect, but is this a myth?

A new podcast to checkout - The 1609 Podcast  (iTunes link) -  by the way1609 is the number of meters in a mile if you were wondering where the name came from.

A couple good shows, 2 parts, to listen to, well most all of them are good, on the Primal Endurance Podcast.  Brad Kearns talks to Dude Spellings about how he went from where he was, where most of us were/are, with regards to training and health to where he is now and how his training has changed. Part 1 & Part 2 or go to iTunes and look for Dude Spellings, Part 1 and Part 2

I love X-Country and will be good to get the course back to being tough and not simply track races on grass with a few bumps and hay bales.  That said not so sure about catering the race to a particular demographic at the Olympics but might be OK for some other races.

What is holding you back, maybe it is you?

Where do Ultra Running and Triathlons meet - 2017 Barkley finisher John Kelly who has done the Ironman Kona before and did it again this year.  Here is his post leading up the Kona where he got 25th in the 30-34 age group and 106th OA in a time of 8:58:49.  Will post his review of the race when he puts it up at his blog Random Forest Runner

Check out Ultrarunning World, a free online magazine, as the new issues is out

Looking for a race in 2019 and want to travel - how about running Vertical to Sky's Mt. Apo Sky & Vertical Race (FB Event Page), on April 13, 2019 in Sta Cruz, Davao Del Sur, Philippines.  Here is their website with info you can see on the 2018 race & you can see their other races here.  As mentioned in Tuesdays interview with Doi Calbes this is the race management company he heads up.

Want to run a road mile, well this weekend on October 21st in Burnside, KY there will be The Burnside Mile at 3PM EST

The third annual Elizabethtown Fall Classic 1/2 Marathon & 5k is coming up  next weekend on October 28th, 2018

Need a trail race at the beginning of November then maybe the Jefferson Memorial Forest Trail Hillbilly Half in Louisville KY is for you on November 3rd, 2018.  I have only run out in the area once but there are some great trails

How about a Thanksgiving Day race - there is the Pilgrimage in the Park 5K Run/Walk at Pulaski Cty PArk in Nancy, Ky on November 22, 2018


Looking for other races around the world, here is where I get most of the ones I list: ahotuMarathons (covers the world), American Trail Running Assoc.  (Mostly US but does have other races on the list),  Running  in the USA & Trail Runner Magazine


More of Greatest Finishes - Part 2.  If you missed Part 1 you can see it here


And 5 months later Jamil is at Ultra Trail Ninghai


Ad/Video: Run Wild - Got dizzy watching them run the ridge in the beginning