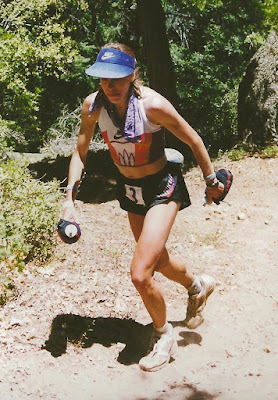 This week's Interview Tuesday was with Mike Silva, I talked to his wife Kim the week before

And from the above Week in Running I found this interesting: if you have not already read it:
With regards to NYC - found this interesting: Second half split for Mary Keitany was 66:58, who won the women’s race in 2:22:48, at the 2018 New York City Marathon.  As a note her first half split was 75:50 and by the way the Official American record for the 1/2 marathon is 67:25 by Molly Huddle. Whereas Jared Ward who took top American honors in sixth in 2:12:25ran his second half in 66:59,  keep in mind he went out much faster at 1:05:25

Local runner Zack Beavin, who I interviewed here and did an update here, ran an Olympic Marathon Trials Qualifying time at the Indy Monumental Marathon a couple weeks ago and here is his report on that run

BBC looks at The Secrets of Endurance Athletes

Abraham Kiptum, the new world record holder in the half-marathon, is entered in the December 7th Abu Dhabi Marathon

A look at Fasted Workouts - I tend to do up to 2 hour workouts fasted, well I do have a cup of coffee with heavy cream so then technically not fully fasted,  and if longer use a modified Bullet Proof Coffee.  Also, on really long workouts - say 5-7+ hours I may also use some other things just to be topped up for a long day running or riding as well as trying out race day nutrition and also depends on how fast I may be planning on going.

A look at trail running in Nepal - The Annapurna 100

Dan Plews talks about his LCHF training and how he raced at Ironman.  Dan was 22nd and the first Amateur at the recent Kona Ironman as well as setting the AG record.

A look at what has helped 5 runners have success, one of these is Steve Speirs who I interviewed some weeks ago,  Part 1 & Part 2

Something many probably do not practice, I know I do not,  and should for Ultras is walking

Setting goals can, and should, lead to further goals an not just stopping once completed: Why Run an Ultramarathon  to Find a Taller Peak

As I have mentioned a number of times, and yes I am working on a review, get a copy of Dr. Mark Cucuzzella's new book Run For Your Life and also check out it's accompanying website RunForYourLifeBook.com.  If you do not think one person can make a difference look at what Mark has done in his area to re-educate on nutrition and health

Looking for a Thanksgiving Day run here is one of them:  Pilgrimage in the Park 5K Trail Run - Pulaski Cty Park, Nancy, Ky - November 22, 2018.  For others in KY you can check here

If you are in, or near, Elizabethtown KY on December plan on stopping by Running Soles between Noon and 3PM for "Let's Talk Ultra" and get some great information on Ultras, and marathons, from Will Rivera

If you want a shorter trail race there is the Turkey Run Trail Bash 5 Miler in Louisville, KY on January 19, 2018


For those doing 100 miles this weekend