This week I talk to Greg Florey of Meade County.  Greg is another runner that I have not really met but have interacted with online and hope to meet some time at a local race.  Next week I will be interviewing the other half of team Florey - Lisa.

Tell us a little about yourself not necessarily related to running: age, where born, education, area you live in, etc…..
Currently I’m 49 years old. I was born in Montgomery, Alabama. Grew up between there, Florida and Georgia. I live in beautiful and rural Meade County, in the unincorporated portion of Vine Grove. Father of 2 and married to my awesome fellow runner wife, Lisa.

What is your profession?
I’m a retired Army Soldier and still working for the Army as a DA Civilian. My job is that of a National Convention Exhibits Specialist for the Army. That is, I travel to locations all over the country where the Army wants to have a presence (booth) at a particular type of National level Conference. These can be anything from Band to Chaplains and Education to Medicine (Dentists, Doctors, Nurses, Physicians Assistants, Veterinarians, etc.). Outside of getting paid for it the biggest benefit is that I get to run in all sorts of new and different places!

How did you start running and what prompted you to do so?
Other than what the Army said that I had to do twice a year (a 2 mile run on my Physical Fitness test), I was never (what I would call) a runner. I didn’t get by the proverbial bug until 2010 (22 years in the Army at that point), when I was going through a divorce. I found that the more that I ran the less stressed that I was. Sort of a Forest Gump transition! lol

How long have you been running?
A little over 8 and a half years now. 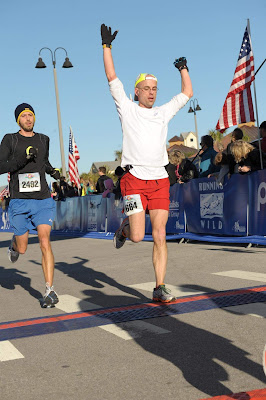 Did you participate in any other sports over the years?
Nope, never had any interest. Not a sports fan…except for watching the Summer Olympics - Women's Beach Volleyball to be specific. lol

Did you run in grade school, High School or College?
Never played any sports in school.

So we get an idea of where you have been with running can you share your PR’s for: 5K, 10K marathon and any other distance you may have run in the past.
As your wife, Lisa, also runs how do you support each others running activities?
We both just get it. The whole, I have to run thing. Usually, whoever is not racing, will crew the other one for their race. When Lisa completed her first 50 Miler at Mo’ Bell in Tennessee, the RD there gave me a finishers award as well, saying that I was voted Best Crew and that she might even have to hire me for her next race. lol

What is your most memorable race or races and share a little about at least one of them?
The Mohican 50 Miler in Ohio where I earned my first 50 mile trail finish! Lastly, The breaks 45 Mile Trail Race (RD’d by the evil genius Mike Whisman), where I learned a lot about myself and the will to live…ok, ok I admit that was a bit dramatic. It was a bit insane though. The last 3 miles were in the dark with monsoon rains, a not the best headlamp, fewer and fewer trail markings up the side of a very steep, rocky and slippery hillside! When I finished, I was so worn out that I had gotten angry and was just making it over to Lisa where I was just going to say, “Let’s get our things and get out of here, now”. Just as I was about to reach Lisa though Mike gets to me first and gives me a hug and suddenly I wasn’t mad any more. #whydidyoustealmyanger #runnerhug Oy vey and lol!

What is your most memorable race you have gone to with Lisa?
The 10th Annual Dash For A Cure 5K on long Island, NY, which was the first time that my wife and I did a race together and the Big Blue Riverfront Marathon in Owensboro, KY, that Lisa and I did as a Co-Ed Team together and we placed 3rd! We had no clue until they called out our names and we were looking around thinking, “Why did they just call our names”? lol

Do you have a favorite workout you do?
Not really. Any run is a good run.

How important do find groups like the Running Soles group to be and why?
I think that they are a great source of inspiration for runners of all types!

Do you have a favorite route you like to run?
I really enjoy Otter Creek, Siltstone and the Back Yard Classic course

What is your favorite distance to run and race?
Trail Half’s are my favorite as they don’t wreck me for the rest of the day afterwards.

What shoes do you run in and what do you like about them?
Currently, I’ve been running in Hoka Speed Goat 2’s (thanks to Will Rivera) for trail.
I really miss my Mizuno Kazans though (Mizuno stopped making them). =(  For the occasional road run I’m currently using, Mizuno Wave Rider 22’s, as they just seem to work well for me.

Do you have any long-range plans?
To improve my ½ trail marathon times.

What do you like best about living and running in KY?
The fact that there are so many great trails and trail races in the area!

Anywhere else you would like to visit to run?
Lisa and I are going up to Canada and Montana next year and while in Canada we’re going to be doing the Banff  National Park ½ Marathon! Would love to get over to Australia someday and run there. I’ve always heard that it’s amazing there for running.


Do you have any bucket list races?
The Barkley Classic and Leadville.

What do you struggle with most with regards to running?
Being consistent with my fueling and hydration. I wish that I was able to get as regimented with it as Lisa is!

What do you see as a trend in running?
That the ladies are coming on strong in the 100+ mile races!

If you had one, well maybe two or three, things to say those that are running to encourage them what would it be?
Stick with it and mix up the locations. Same path every day can turn a joy into a drudgery.

Any closing comments?
How soon before I can get in another run? ;-)