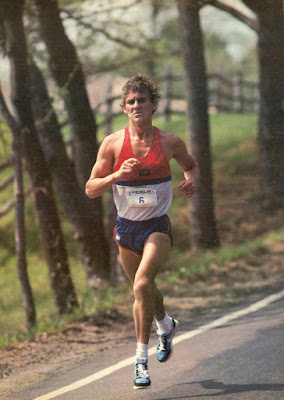 "My goal is to stay fit enough and fast enough to
be able to make a high school cross country team,"
Herb Lindsay

The quote above came from this article when Lindsay was 56 - I have the same goal at 60 - sort of makes for a full circle thing.  Always remember watching Herb run back in the day - he never made it easy for anyone.

This week's Interview Tuesday was with Lisa Florey whose husband, Greg, I interviewed last week.

Dathan Ritzenhein ran a 61:28 in the New Orleans Rock 'n' Roll Half marathon

Jeff Browning (47) wins Tarawera overall, even with a few extra miles due to an early mistake, and Camille Herron wins the women's race and gets 2nd overall after taking it out hard.  Seems the late advantage went to Jeff in the technical stuff - both broke last years record as 2018 was the first year for the 100 miler.

Speaking of Jeff hard to argue with his training being as good as he is when many are slowing down.  Here is Bronco Billy's Tough 21 Strength Routine - I know I am going to try and work this in.

Will be interesting to see who shows up for this in September: Centurion Track 100

Cool that you hear more of this coming out - as it speaks to those that say they run fast on lots of carbs and hard to deny that many are fast but at what cost and could they be just as fast if they took the time converted to a different fuel source. The issue is the time for conversion to LCHF for many athletes as they do not see themselves being able to take that time having to put out performances now.

Can't get much closer to breaking a record as Yomif Kejelcha, who was not afraid to tell everyone he was after the Indoor World Mile record, missed breaking the record at the Millrose Games by 0.02 seconds.  Funny because so many articles said he was 0.01 seconds from breaking it but that would just tie it.

How often do we not learn from previous years - I know I often forget, or is it neglect, the past


Masters News
I posted this above but wanted to share it here as well as if there is one thing I lack in my training as I get older - I am sure there is more than one thing - is strength training:  Bronco Billy's Tough 21 Strength Routine 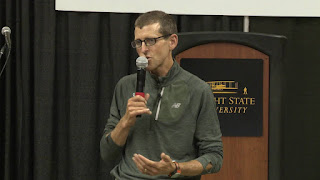 *****Talk and Clinic*******
If you are going to be in the Elizabethtown area, or live nearby, Mark Cucuzzella will be in town Feb 22nd and the 23rd.  Mark will be talking about his new book - "Run for Your Life" - on Friday the 22nd and on the 23rd will hold a clinic covering Natural Running and Health.  All events will be held at the Running Soles store on the square in E'town.  Here is a recent Trail Runner Nation interview with Mark

Want to run something different and short - most will get a PR since most have not run a 3k - then run the Warriors 3K Sprint March 2, 2019 in Somerset KY

Want to run a not so common distance then how about doing The Perfect 10 at Mt. Brilliant Farm 10 miler, there is also a 10K in Lexington Kentucky on March 9, 2019

This was a fun race last year in one of my favorite places to run - Pulaski County Park, Nancy, KY - so if you want a good race on March 23rd, 2019 then try the Edurus 10K Trail Run

If you are in the Somerset KY area June 1, 2019 think about running the Over My Head 5K.  All Proceeds will go to support Over My Head Somerset. The Local Homeless shelter in Somerset & Pulaski County - Consider making an extra donation.


A look at the Elephant Mountain Trail Run