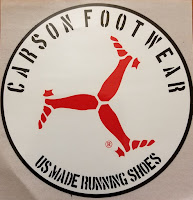 If you are looking for an American Made minimal shoe that actual does have some cushioning and feels great then look to Carson Footwear.  I just got chosen as an Ambassador for them and what is unusual with Carson is that I told them that it would take some getting used to minimal shoes for longer races and they were fine with that.  Also in asking questions about the shoes I not only got a quick response from them but the owner Everett Carson contacted me, do not find that very often.  So over the coming months I will give updates on the shoes as I get used to using a more minimal shoe.  If you are interesting in trying them you can use the following code when purchasing a pair of shoes or other items on their site: Run2017tonyk

Jim Walmsley smashes another record as he wins the 2017 Tarawera 102K Ultra.  Here is the iRunFar.com interview with Walmsley and also here is an interview with the women's winner Camille Herron.  Here is iRunFar.com's review of the results.  Also Mike Wardian finished 8th in 8:49:36 only a couple weeks after winning the World Marathon Challenge.

And from LetsRun.com the Week That Was.  Pretty amazing that Yuki Kawauchi from Japan has more sub 2:10 marathons (11)  since 2011 than all American men (10)!

Places to run in the 20 biggest metro areas in the US.  But if you are ever in the Fullerton CA area on a weekend and need a trail to run try the Fullerton Loop as while you can do more, or less, the main loop will get you 10+ miles - here is my Strava data for a recent 31 miler done by running the loop 3 times.

If you are interested in Optimized Fat Metabolism (OFM) here is a Mental Roadmap to follow.  If you think OFM is only for elite athletes then think again as it is also good for the everyday athlete with more on their plate than just training:  Real World OFM Performance You Can Relate To


Here is a Biking-Running-Climbing combo for an FKT