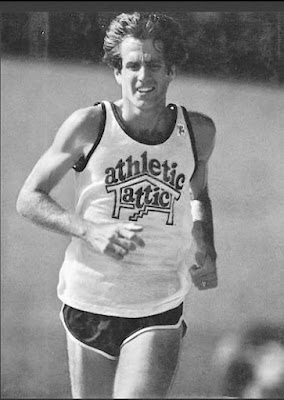 "Just remember this: No one ever won the olive wreath
with an impressive training diary."
Marty Liquori

This week's Interview Tuesday was with Ty Martin, a local runner where I live in Kentucky

Good to see Yomif Kejelcha get the World Indoor Record after just missing it then getting second in an attempt at the 1500m record so the third time is the charm as he knocks 1.44 seconds off the old record

Check out this interview with Dr. Mark Cucuzzella on by Zack Bitter and Dr. Shawn Barber on the Human Performance Outliers

David Roche looks at training for Trail and Ultra races

Recovery during an Ultra Racing season

I just got a pair of Topo Ultraventures and while only having run in them once they seem like a good shoe to have in the arsenal.  Here is a review by Trails and Tarmac and one by Steve Speirs of Run Bulldog Run

A look at the breaking of the sub 2hr marathon

Many of you may floss your teeth but how about your muscles.  While I have not done it as much as I should I have found that it works.  Here is an article on RockTape's Rock Floss

All too often, if you are like me, you do not think much about rest days but you should and should seek to get the most out of them

There is a new watch on the block, Coros Apex, you may have heard of and here is a review of it on Ultrarunnerpodcast and also one from DC Rainmaker

Some thoughts on proper shoe fit - You Do Not Have a Shoe Size, You Have a Foot Size

Nice to see runners get the OTQ

Two Rivers Treads podcast  Run For Your Life talks to Paul Encarnacion about his run at the Hurt 100, eating Low Carb and other topics


Masters News
Ino Cantu (85) was busy this past weekend at the USATF Masters Indoor Championships as he set an age group world record in the mile at 7:47 and the next day an American record in the 800m in 3:38.62

If you are close to Bowling Green there is the 2nd Annual St, Pats Dash 5k on March 9th, 2019 - put on by Phoenixrisingky.org

Want to run a not so common distance then how about doing The Perfect 10 at Mt. Brilliant Farm 10 miler, there is also a 10K in Lexington Kentucky on March 9, 2019

This was a fun race last year in one of my favorite places to run - Pulaski County Park, Nancy, KY - so if you want a good race on March 23rd, 2019 then try the Edurus 10K Trail Run

If you are in the Somerset KY area June 1, 2019 think about running the Over My Head 5K.  All Proceeds will go to support Over My Head Somerset. The Local Homeless shelter in Somerset & Pulaski County - Consider making an extra donation.


The Weight of Mountains by Altra - Running and Mental Health


A great race in the Women's Indoor 3000m European Championships

The RUNdown #23 from the Ridge RUNers