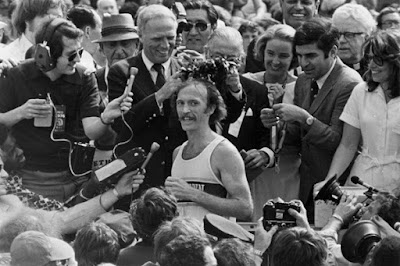 “Victory is purely defined by the results, and success can be defined by an internal measure of what you did against what you felt you had to give.”
Jack Fultz

For Boston Marathon history you can't do much better than the new Boston: The Documentary but there is also a good video on YouTube called 117 Seconds of Boston Marathon History

A look at the weather for this coming Monday's Marathon

Preview of the Boston Men's race Part 1 & Part 2- Also, news as of 4/11/18 is Dathan Ritzenhein is also out with an SI Joint injury

As Mario Fraioli says, there is much talk about Boston, as there should be, but do not forget there is another 6 days later on April 22nd - the London Marathon and it could be a great race as well, maybe even better than Boston, with the likes of Kipchoge, Bekele, Wanjiri, Adola and hometown favorite Mo Farah in the men's race.  For the women's race you have Mary Keitany of Kenya and Tirunesh Dibaba of Ethiopia.

This week's Interview Tuesday was with Allen Reynolds

A race review of the 2018 Georgia Death Race

I did not know Magdalena Boulet was running the Marathon des Sables (MDS) in Morocco but she is and took the lead on stage 4, the long stage, with one more stage to go.  Also, here is Ian Corless' review and pictures of Stage 4

Check out the the new documentary on Amazon called Ouray 100 - tells the story of Avery Collins run at Ouray how he dealt with going off course in the early miles.  I have not seen it yet but it is on my list.  If you have Amazon Prime is is free right now otherwise it is $2.99 to rent the HD version or $1.99 for the SD version.

If you have ever read a review at DC Rainmaker, if you have not you should, and wonder about who Ray Maker was Outside Online did a good write up on him

Nicki Rehn shares here thoughts on her 5th try at the Barkley: Help is not coming-Brakley #5

If you read Track & Filed News as I did for many, many years you will know the name Jon Hendershot as he was part of T&FN for more than 50 years.  Well, Jon passed away this past Monday (4/9/18)

If you want to keep up with Masters Running, especially Track & Field subscribe to National Masters News.  It is a great red and gives you the ost news I have found on masters running.  Would be nice if there was more road and trail news but maybe that will grow.