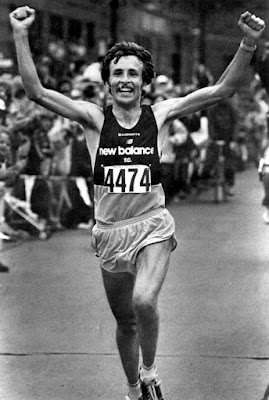 “The one thing that you have, that is better than any gel, any drink, or any food, is something you’ve always had. It’s your mind and it can truly get you through anything.”
Dick Beardsley

A talk with Dick Beardsley about his race with Alberto Salazar at the 1982 Boston Marathon where he got second - a race often referred to as the "Duel in the Sun."  See video below on the race.

One of the great stories out of this years Boston Marathon has to do with 2nd place in the women's race.  Sarah Sellers a nurse from Arizona who is unsponsored and paid the $180 entry fee toughed out the weather when many did not and won $75K for 2nd

Dr. Mark Cucuzzella's article on going for his 31st straight year of running a sub 3 hour marathon and doing it at Boston.  Sadly due to weather Mark did not go sub 3 hours but with the weather his 3:04:31 was a great run.

Photos from the 2018 Boston Marathon

Dave McGillivray so as to run his 46th straight Boston and for the MR8 charity ran it at night after race directing all day.

Another Boston in the books and while the weather greatly affected the times which were far from fast it did not dampen the excitement and the pleasure of seeing two of my favorite runners win - Desi Linden and Yuki Kawauchi.

Here is a article on Why You Should Love Yuki Kawauchi

LetsRun.com's look at Desi's win and at Yuki's win

How sportsmanship can/may help our running

So now that Boston is done the focus is now London this Sunday.  We go from cold and wet at Boston to maybe the hottest London Marathon yet

Preview of the 2018 London Marathon

7 races of out of the ordinary distances

A wrap-up of the Marathon des Sables - Morroco

If Patience is the number one trait for an Ultra runner I may be in trouble if I do not learn to have some:)

National Geographic looks at the Ben Clark, Timothy Olson and Anna Frost's attempt at the Himalayan Snowman Trek.  The trek usually takes a month and they were gong for two weeks.

Alex Hutchinson who wrote the great book Endure: Mind, Body, and the Curiously Elastic Limits of Human Performance writes for Outside Online and share his thoughts on Why it Matters How You Think About Pain

Are you overtrained - here are 5 symptoms that you may be

If you want to keep up with Masters Running, especially Track & Field subscribe to National Masters News.  It is a great red and gives you the most news I have found on masters running.  Would be nice if there was more road and trail news but maybe that will grow.


The London Marathon Course in under 3 minutes


Documentary short from the Sinister 7 Ultra