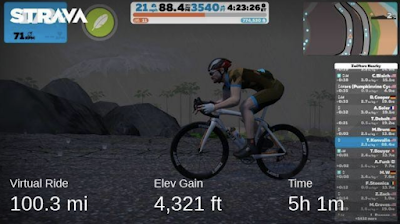 As I begin a new year with a mix of racing between running, including Boston, and gravel bike races training gets a little complicated in finding the right mix to do the best I can in both sports.  While specialization is often the best course it is not for me for a couple reasons.  One is that with still having some foot issues running as much as might want is not presently possible.  Secondly, as I touched on here, I really like to ride so finding the best mix is both necessary and preferable.  The challenge then is figuring out the right mix of mileage and efforts for both disciplines so that I can do the best in racing at both endeavors.

The general plan is to keep my individual runs to lower miles, less than 10, for the most part till closer to Boston and to work up to more marathon tempo runs for these shorter runs.  To get extra miles in and put less stress on my foot I will do a number of two-a-days as that seems to work for me.  As far as endurance work I will use my riding to get in time at a lower HR and get in extended aerobic work.  This also works into the bike races I have planned as a number of them are quite long with Dirty Kanza, if I get in, being 200 miles and Steamboat Springs being 140 miles with a couple other races of 4+ hours so time in the saddle is important.  I also found in my R2R2R this past October that riding a number of 100+ mile rides does help with endurance for long runs so I think the longer rides can be used to my benefit at Boston.

As far as preparing for Boston, as mentioned above, I am going to work to see if I can run more faster tempo shorter runs to get my legs ready for the pace I want to run at Boston.  I want to try for 7:30 – 7:45 pace at Boston, at least that is the current goal, so we will have to see how this works in training but the key is working out at a pace that will benefit my Boston run and at the same time not over stress my foot.  Once I am done with Boston in April I will run a little less to get ready more specifically for bike racing till after Steamboat then step back and re-evaluate my foot and what is ahead for running.

In the next couple weeks I want to try and write down this plan and mileage for the next few months.  I do this knowing there will be changes as my work schedule often changes and due to this I have to alter my plans.  The key with training plans is flexibility without compromise.  This means being ready to modify training when required but not using the time to back off on what needs to be done.  But also flexibility entails being ready to pull back when needed and to do more if needed and possible.  For me that is the hard part as I tend to be sort of OCD and can get myopic and lose sight of the bigger picture in looking at only what I want to do then and there.  I need to not be that way to avoid injury and burn out.

As usual more to come.

Week’s Running Overview:
This was the first full week back running and riding and by the end of it felt like it.  That said it was a good week and great to get back at getting ready for upcoming races.  Will find out about Dirty Kanza by the end of the month as I entered this week and it is a lottery but right now I do have the following confirmed with regards to longer races: Boston Marathon in April, “45” Gravel Race in KY beginning of May, Provided I enter on time the Kentucky Gravel Championship (63 miles) the beginning of August and Steamboat Springs Gravel Race (140 Miles) in August the week after KGC.  I am sure there will be more but for now that is the list.

I initially looked to do 15-20 miles and ended up with just over 20.  I did this in four runs over three days with two runs on Wednesday.  This did seem to spare my foot as felt better doing 10 miles this way than one ten miler right now.  For these runs I ran them at a relaxed pace and was pretty happy with them.

For riding I rode 3 days with two 35+ milers on Tuesday and Thursday at an easy pace.  Then on Saturday I set out to do my longest indoor ride ever.  Last week I stopped short of doing an extra lap to get in a 100 but not this week.  I was going to do my first group ride on Strava but after a warm-up I got to the start of the ride but there was no one else there.  The ride started, it was to be a 100 miler, and still no other riders there so after a few miles stopped the ride and change to a different location in Zwift.  I rode 4 laps in Watopia and got in a good 100 miler averaging 20mph for, with the warmup, 104+ miles and longer than I have ever done time or distance wise indoors.  This was also the first 100 miler of the year and I have a goal of at least one 100 miler a month with 15-20 for the year – we shall see.

Thus a good week of training and was feeling it some near the end of Saturday’s ride.  I will see how my legs feel next week but hope they will come around.

Weekly Diet Notes;
Slowly getting back into the way I normally have eaten after a holiday foray from my normal routine.  Probably still eating a little higher than I normally do on carbs but getting back down to my usual goal of 100-150 grms a day.  Knowing I will be riding more I am ready to see if maybe I need a few more carbs depending on my training and how I feel.  For me at least I find that little to no-carb does not work but the work is to figure out what does work by feel as I do not like counting things so tend to work by feel.  This may not work for some but does for me.  Other than that not much else right now on the eating front as while I am LCHF my basic goal is to just get good and healthy food.

Conclusions and the Week Ahead:
For next week my goal for running is 20-25 miles doing so much as this week but with 6 miles runs with two runs on Wednesday.  As far as riding miles they will be a little less this week as wan to do at least two 40 milers then see how things go on the weekend with a 50-70 mile ride – probably indoors for all rides based on weather outlook for the week.