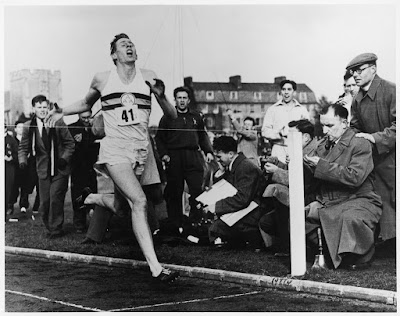 "We run, not because we think it is doing us good, but because we enjoy it and cannot help ourselves.  It also does us good because it helps us to do other things better. It gives a man the chance to bring out power that might otherwise remain locked away inside himself.  The urge to struggle lies latent in everyone. The more restricted our society and work become, the more necessary it will be to find some outlet for this craving for freedom. No one can say, 'You must not run faster than this, or jump higher than that.' The human spirit is indomitable."
Roger Bannister

Sir Roger Banister passed away this past Saturday (March3, 2018) at the age of 88.  There may be faster men but few greater.  If you want to watch a good documentary on Banister here is one I suggest : Bannister: Everest on the Track.  In the documentary they share how Banisters sub 4:00 Mile came a year after Hilary climbed Everest in May of 53' and Queen Elizabeth was coronated in June of 53' and then Banister's mile in May of 54'.  All this after England was struggling after the war and these success changed the nation.  His mile not only opened a door no one thought able to be opened but also solidified a changed mindset of a nation. Lots of posts on his passing so here are a few:
A good post from OutsideOnline looks at What we can learn from Roger Bannister and Peak Performance looks at how easily the story could have been different with regards to who we remember for braking the 4:00 barrier.

This weeks Interview Tuesday was with Somerset's Jeff Golden

Good article on the start of the Barkely Marathons.  Also, check out the site as lots of good stuff there.

Not big news here but it is in South Africa where it has been reported that Siphiwe Ndlela (28) passed away at training camp.  He came in 7th (2016) and 6th (2017) in the last two Comrades Marathons.

The new video by The Ginger Runner (Ethan Newberry) is out and you can get it here thru March: Where Dreams Go to Die   It looks at Garry Robbins attempts at completing the Barkley Marathons.  You can check out the trailer on the site or below.  Consider purchasing a copy as it helps with more quality movies of this type being done.  Here is an article on the documentary by Runner's World.

A look at this past weekends Lake Biawa Marathon in Japan where Jake Robertson got third in 2:08:26 and broke the long standing NZ marathon record of Rod Dixon by 33 seconds.

Seems like a number of people in the running community have passed away over the last week.  Here is a good article on one of them, David Martin.  With all the drug issues in sport I may have changed the title of the post and left of the "scientist" part, IMO, as it may give a wrong impression to some just reading the title.

Some thoughts on dealing with pre-race nerves

Will be interesting to see how Dathan Ritzenhein does at the NYC Half on March 18th in his preparation for Boston.

Ritzenhein also talks to LetsRun.com about a number of subjects in this interview

David Roche writes on it really is OK to run easy, and why

Good article on running mechanics and seeing that optimizing for efficiency and power are not the same.  IMO, I would also add a third element and that is ones natural biomechanics in that we are not all built the same and while similar principles may apply there are times a theoretical biomechanical change may be detrimental if ones body does not naturally run that way.  I think of Paula Radcliffe and her, what some would call excessive, head bob and arm movement and how one might say if she just did not do that how much faster could she go but truth is stopping it may have had other affects as well as the effort to do so may have robbed from other areas.  All to say we can look at how we run and even work to change things but be aware that we are not all the same so general principles may apply but we, at the end of the day, have to know who we are as an individual.

This guy is going to run the Tour de France course over 70 days to raise money for a couple charities: Mind and also Livability

If you watched, or read, about any of the World Indoor Championships just held this past week in England one of the big stories was all the DQ's that took place.  While technically the rules were broken in most of what I saw no advantage was gained, the reason for the rules, and thus DQ's were questionable.  Great look in this article about how they treated Moe Farah's stepping over the inside rail in last years World Championships in London with the DQ'ing of the USA's Paul Chelimo this past week - hmm maybe some favoritism there - to be fair they did not DQ Hasan, and could have, in the 3000m to let Laura Muir move up a place but that is only one instance.  Here is another look at all the DQ's, which again were in deed DQ'able offenses by the letter of the law, as to what needs to be done since is it the referee's fault if they just want to obey the rules to the letter.  Want to make T&F irrelevant, or should I say even more irrelevant, do what they did in Birmingham this past week - instead the rules and how they are enforced and the penalties need to be reviewed so this does not happen again.

Article on Meb putting his support for Atalanta for the 2020 Marathon Trials.  What I found interesting in this article was this in relation to what was being looked at in choosing a course: "However, the biggest factor for the selection committee is the overall experience for each athlete, including arrival, accommodations and the city’s embrace of the event."  Should not the team, if you want the best team for a given climate and terrain, be chosen on a course that would most closely mimic the 2020 marathon course in Tokyo in late July to early August.  This may mean picking the team earlier but picking a team on a cool fast course may not be what you want for a summer day in Tokyo - just saying.

Lots of races out there but if you are near the Danville KY the trails at the Shaker Village are really nice and this is a fun event: 2018 (un)Pleasant Hill Trial Runs - April 14, 2018.  I ran the marathon there a couple years ago and it was a small race but a great course.  Lots of distances to chose from: 5K, 10K, 25K & 50K.  To soon after Yamacraw 50K for me but I do need to get back out to just run the trials out there.

If you are looking for a race in Kentucky check out Good Times Races as they do the timing on a lot of races.

USATF selects the World Masters Athletics Athlete of the Year


Roger Banisters May 6th, 1954 Breaking of the 4 Minute Mile Barrier


A look at 11 National Parks to run in


If you have Netflix you might want to watch the documentary Icarus on the Russian doping scandal, by the way it also won an Oscar for Best Documentary