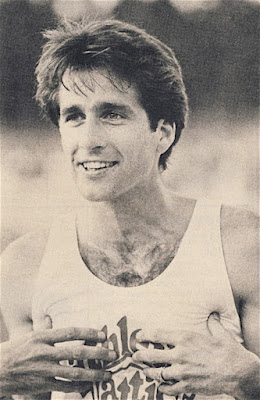 "There is no satisfaction without a struggle first."
Marty Liquori

This week's Interview Tuesday interview was with Tom Bowden of London Kentucky.

Citrus Mag looks at the past week

The course, with help from the weather, won this year as there were no finishers at the 2018 Barkley Marathons

Want to take part in a summer training camp, here are 10 to look into.  If I had to choose I would do the Colorado  Running Ranch camp with Jeff Browning and Krissy Moehl

Yuki Kawauchi's 78 sub 2:20 marathons in certified as a record by Guinness and on the same day as the ceremony he ran a 1:10:03 1/2 marathon in a full panda suit

Want to know how to get ready for Skyrunning, Redbull has a beginners guide

The U.S. Track & Field and Cross Country Coaches Association (USTFCCCA) has a magazine and you can download the newest copy here.  You can also get back copies here.

One hot topic when talking about form is foot strike.  At the Topo Blog they talk about: Three Truths About Foot Strike

The XXI Commonwealth Games (Gold Coast 2018) begin next week, April 4-15 with Athletics starting on the 8th

Men's Running Magazine talks with King Kilian.  Sadly Kilian broke his fibula during a mountain ski race and is now in rehab to heal the injury

Great to see Will Rivera who is the owner of Running Soles in Elizabethtown, KY, and interviewed here, is on the US Spartathlon Team for 2018

As I will be running the Run Under the Stars (RUTS) race in Paducah, KY in June this article on running timed events was timely.  The RUTS I am running is a 10 hour race on a 1/2 mile course.

A look at your arches: Arch Height Vs. Arch Function

A look at the top marathoners and marathon courses

Last week I shared Citrus Mag's looks at the cities bidding to be the host for the 2020 Olympic Marathon Trials but Atlanta had not been posted yet, thus here is the completed list: Chattanooga, Austin, Orlando & Atlanta


New video on last years Barkley by Alexis Berg: La Barkley Sans Pitie ( The Barkley Without Pity ).  It is done very well and in a different format than other videos on the race (Video is also below)


Run Steep Get High: The Year The Barkley Won


A look at Dag Aabye: The "Most Elusive" Man in North America